I love documentary readers. I think they are the most valuable pedagogical tool. What does this have to do with race and new religious movements? I’m glad you asked. 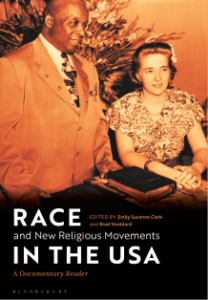 With fellow #religionole grad Brad Stoddard, I co-edited Race and New Religious Movements in the USA: A Documentary Reader. This reader actually grew out of an essay I wrote for the Oxford Research Encyclopedia of Religion in America. I was asked to write the entry on Race and Alternative Religious Movements.  One of the points I raised in the section on primary sources was that there was no documentary reader in this area. I gave Oxford Brad’s name as a possible peer reviewer for the essay. He reviewed it (which made it better!) and then emailed me about the idea of doing a reader. A few years later and it’s here!

The book covers sixteen groups, along with a volume introduction on key terms (like race, religion, and new religious movements). The communities included in the text are: The Code of Handsome Lake, Conjure, The Church of Jesus Christ of Latter-Day Saints, Spiritualism, Ghost Dance Movement, Ku Klux Klan, Theosophy, Native American Church, Commandment Keepers, Moorish Science Temple, International Peace Mission Movement, Nation of Islam, Peoples Temple, Aryan Nations, The Nation of Yahweh, and Odinism. Each chapter is about 5,000 words and includes a ~1000 word introduction on the movement, followed by 1-5 primary sources from the group or about them.

This site is part of Humanities Commons. Explore other sites on this network or register to build your own.
Terms of ServicePrivacy PolicyGuidelines for Participation
Skip to toolbar