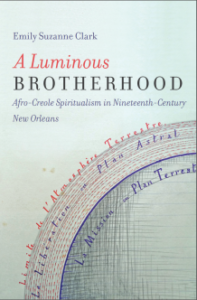 My first book, A Luminous Brotherhood: Afro-Creole Spiritualism in Nineteenth-Century New Orleans (UNC Press, 2016), examines how the beliefs and practice of Spiritualism helped Afro-Creoles mediate the political, social, and cultural changes in New Orleans as the city moved from the antebellum period through Reconstruction. The messages the Cercle Harmonique received from the spirit world and the spirits who sent them offered the circle a forum for airing their political grievances and looking forward to a more egalitarian world. Certain republican ideals, particularly those inherited from the memory of the French Revolution, were reinvigorated and reworked to relate to contemporary issues. This project brings together two historiographical genealogies: the history of race in New Orleans and the role of religion in New Orleans politics, culture, and society.

my research subjects engaged in the practice of Spiritualism and spirit communication through a medium. The message of this metaphysical religion—with its abolitionism and criticism of authority figures—threatened the status quo of the South, and thus, those invested in and in want of social and political changes found a religious orientation that interlaced with their goals. The world of spirits located a receptive audience in the free blacks in New Orleans who suffered increasingly restrictive laws and then met with violent resistance to suffrage and racial equality after the Civil War. For Afro-Creoles, their political aspirations had found a spiritual medium. Many messages—from spirits as diverse as Swedenborg, Saint Vincent de Paul, Montesquieu, and even Confucius—discussed government structures, the progress of humanity, and equality. The Afro-Creole Spiritualists were encouraged to continue struggling for “justice” with “courage and patience.”

Additionally, though many messages were critical of the Catholic Church hierarchy (and it is worth noting that the Church officially supported the Confederacy) this circle received many messages from beloved former New Orleans priests known for their egalitarian perspectives and from Saint Vincent de Paul. They may have officially left the Catholic Church, but the impact of Catholicism on them and their “Creole” identity extended beyond cathedral doors. This intersection of Catholicism, race, and power in part inspired some small projects on Catholicism and colonialism.

Stories from A Luminous Brotherhood and excerpts from an interview with me are featured in Season 2 of History Unobscured, hosted by Aaron Mahnke. It’s fabulous storytelling and wonderfully researched history.

Reviews of A Luminous Brotherhood

Interviews about A Luminous Brotherhood

Other media on A Luminous Brotherhood

This site is part of Humanities Commons. Explore other sites on this network or register to build your own.
Terms of ServicePrivacy PolicyGuidelines for Participation
Skip to toolbar